OmniWatch was installed a few months ago in Olympia London’s data centres at Hammersmith and at their disaster recovery server room in Canary Wharf to monitor its various Jacarta interSeptor Climate Monitors. This provides Olympia London real-time alerting and information for critical environmental conditions in its server rooms.

Recently Olympia London wanted to monitor their UPS power metrics and had a few options on ways to do this such as adding their emails to the on-board communications module or adding it to their Solar Winds installation but approached Spook because they felt the way OmniWatch monitors their existing environment was the most straight forward. Spook also has a proven track record on successfully monitoring environmental alerts for them in the past.

Now Olympia London has easy access to their complete suite of UPS metrics centrally via OmniWatch’s real-time dashboard and have chosen to add the following as ‘critical’ alerts: Run Time Remaining, UPS Errors and Voltage for L1, L2 and L3.

We could have added ourselves to the UPS communications module for emails or added the UPS to Solar Winds but felt the natural custodians to manage this were Spook. We now have clear, easy to view real-time UPS metrics on view in the IT department. We have this permanently displayed on one screen in the IT department. However being a cloud-based service we also have easy access to this from any smart device wherever we might be.
We also rest assured knowing that in the event of a critical alarm we will be emailed, texted and more crucially, contacted on landlines by Spook’s 24/7 call centre in the event of a problem occurring. The call centre contact is especially welcome just in case our email is down or our mobile phones are out of signal or turned off at the very moment we need to be contacted. 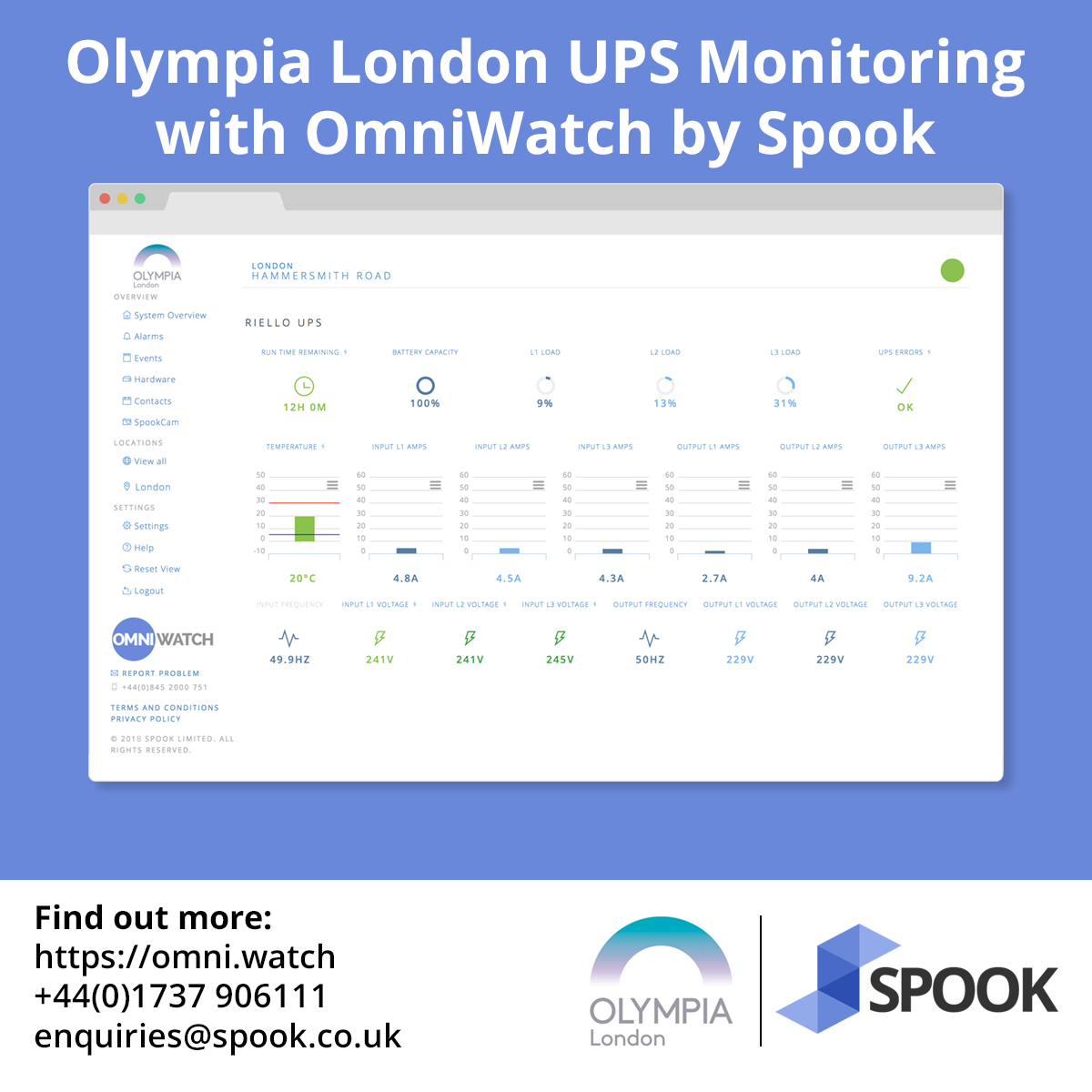 Olympia London is more than an Iconic exhibition venue, conference centre and live-event space. It’s an inspiration. Against a backdrop of grand Victorian architecture, the seven connected spaces inspire engagement and enjoyment.

Olympia London is recognised in the industry for exceptional levels of customer service and support, and their numerous awards are testament to their clients’​ satisfaction.

The recent £45 million redevelopment of Olympia West, Central & Conference Centre has provided the venue with new-found flexibility for events of every size, bringing modern facilities and British heritage together.

Spook Limited (Spook) was incorporated in 2003. Spook’s flagship service OmniWatch is an award winning multivendor IT Environmental, power and video surveillance service. Providing 24/7 valuable early warnings to critical changes to IT areas that if left unattended may escalate to unplanned IT downtime.

Our customers span every industry sector and OmniWatch is installed in hundreds of rooms across the UK and Europe. OmniWatch provides affordable and uncomplicated monitoring and our users access the service securely in the cloud on any smart device.

Get in touch with Spook

Please contact us if you wish for further information on how Spook can help with your environmental and power monitoring needs.